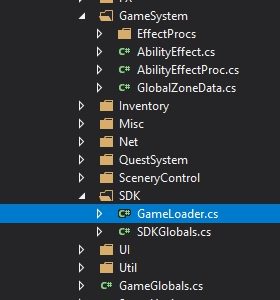 With the prototype 0 phase complete, development now enters the next stage: the target for prototype 1 is to create a downloadable distribution of the TGNeo Framework and an, initially pretty limited, modding SDK package, allowing interested third parties to create content and game play mods and even host their own game servers.

The TGNeo framework, underlying the “Lost Realm of Anoria” has been designed for supporting modding from the beginning. All game play relevant objects (items, abilities, ability effects, spells, quests, spawn and loot configurations etc.) are unity scriptable objects and as such can be easily exposed to modders, which in turn then can create their own content.

Using the SDK it will be possible to create content, include it with your own zones in the form of mod asset bundles and configure the system to load your own content either on top of the provided demo content or as a complete replacement. The SDK will contain a combined client/server binary (the server can be run headless) and an empty database, allowing everyone to host their own games.

The current project time frame for an initial release of the modding SDK (TGNeo Prototype 1) is late spring to early summer 2019.